The training classes started yesterday afternoon and we will have during the whole “training week” quite long training sessions: 3 hours in the morning (8.30-11.30) – 3.5 hours in the afternoon (14-17.30). That’s so it should be, and it fits me very well. 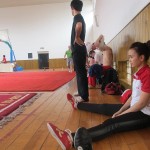 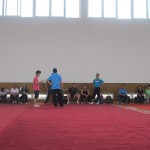 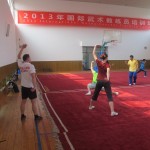 Anyway. The training started with the learning of the 3rd set ChangQuan. It went quite ok, thanks to our training of some combinations from that form at our club. The teacher for the ChangQuan, and later this week for the NanDu (or degree of difficulty which means jump techniques and other difficult techniques) is Li YingKui, professor in Wushu at Beijing Sports University and is the creator of that new ChangQuan routine. He gave us a lot of precious details about the rhythm, and how the techniques should be performed for getting power and why (and sometimes in a different way that the instruction video). 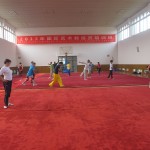 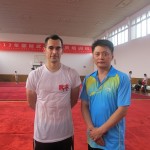 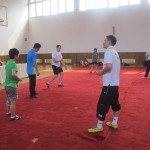 There are people with different levels here: in my class there are for example 3 awesome girls, Geng XiaoLing from HongKong (the real gold medalist from the worlds in Ankara in Qiangshu), a girl from the Vietnamese team and and a Chinese girl who has immigrated in Poland and give wushu lessons there now. There is also (lucky me!) some average people!

We learned the 3rd set ChangQuan routine during the first training session. Then we repeated it today in the morning and in the same time we went through the 1st compulsory. This afternoon we learned the new GunShu routine. Learned… I was not so comfortable with it actually because I’ve not been training so much advanced gunshu routines before (I’m originally from the NanQuan dark forces), and I didn’t know any pieces of that routine. We learned the routine quite fast and the teacher was Zhou LiJuan from the institute of Physical Education in GuangZhou. I can say that I was a little bit lost all the time, but I struggled during the whole class and it went better after been doing the two first parts. I think that I now get it, but I have to repeat it before the examination on Thursday otherwise it won’t be good. Because Yes! (or No!), we have of course a technical examination at the end of the “training week”. I will tell you more about that later! But apparently they changed their criteria of notations and a good athlete prestation will be required for both judges and coaches who are following that course… Exciting isn’t it?
More to follow later because now it’s light off!! Good night!

2 Responses to "Wushu Stockholm IF at the International Wushu Coaches Training Course, part 2" 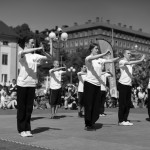